Today I am foregoing my mews article to help my Mommie. I am also going to introduce you to some furriends of mine!

First to Mommie... In lieu of all that I have reported to her about the bounty on cats in Iowa and O-HI-O, she has decided to plan a fundraiser to help spay/neuter local feral colonies here. This will also help bring attention to the shelter/low cost clinic that she volunteers at, which is Cats Exclusive! She needs your help in deciding where to host her fundraiser. Should it be a bowl-a-thon? She wants to do something that is fun and fambly oriented. Peas comment and help her come up with a place to host it! If you are in the south Florida area, you can volunteer to help! My Mommie always needs lots of help, sometimes she is a little crazy.

Now to introduce you to some of my furriends...

This is what I like to call a Tubby Timby 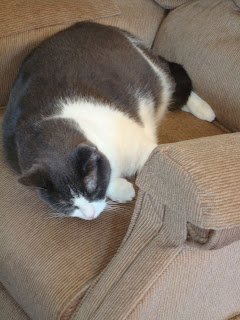 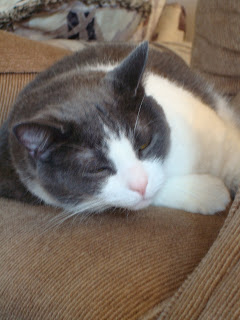 And this is what I like to call a Tiggly Wiggly 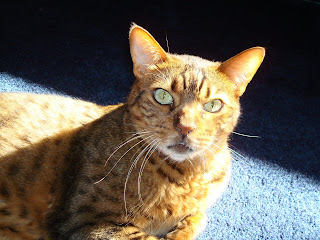 They has known each other many years and live with my Grandma! 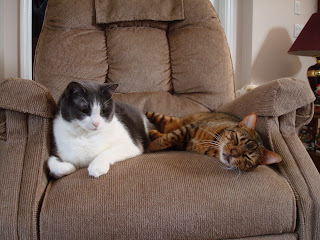 I think you can sees that they is spoilt

Timby is on a diet, right Grandma???? The V-E-T said that he is obese and is at risk for diet-beet-ee's so he has to get in shape! Right now he would make a good meal for a vishus deer! 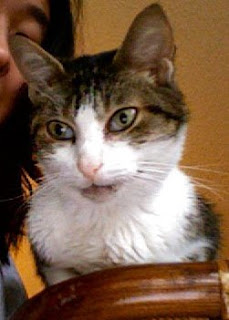 He is the Great Kitty that Came Before Me, he was also my Mommie's first kitty. She gots him when she was much younger. He actually helped raise Timby but that was a long time ago. Later he went back to being Mommie's only baby when she moved out for college.

He went to the rainbow bridge last August right after Mommie's birthday and right before I was borned. He had CRF, but that is all I know. My Mommie still does not like to talk about it. She says he is my guardian angel though! So he is Leo the Lion and I am Cecil the Cougar.

I hope you have enjoyed meeting my furriends that are not part of the blogosphere!

Just to remind you that I is still the lead kitty of this blog! 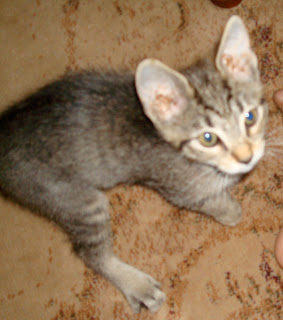 Even when I was an itty bitty baby cat, I was still as fierce of a real cougar! See my back paws, I am about to pounce and kill!

PeeEss: Please don't forget to say where Mommie should have her fundraiser!

We've never thought about anything like that. A bowl-athon would be fun with my human--her best was a 75 and her worst was a 22... It would be funny don't you agree?

I'd look at several places in the area to see who can offer the best deal as far as space and what can and can't be done.

We are thinking that Tubby Timby might be a candidate for our Weight Watchers Anonymous Thursday meetings...

Oh it was nice to meet Leo the Lion... we always fink that the ones before us watch us and spread magic to us. Cecil you were a fierce little mancat, weren't you?! We think that the bowl a thon would be a lot of fun! Great idea...

Cecil, mommy says that you was the most adorable baby!

Leo the Lion is a great guardian. we knows that your mommy misses hims - he seems like a very speshul boy.

I am glad Mommy lives in O Hi O with me 'cause she saw Gin's photo and is now in love with him!
Are you pals with Daisy? Are your Moms pals, cause they both are helping at the same shelter!
I think bowling would be fun!

Purrhaps a park? If you can work with your local authorities, similar agencies, veteranarians, etc. they may get behind you/co-sponsor an outdoor event. Where Mom used to live they did events like that and it brought out all sorts of families and people. They did a silent auction of pet products to raise funds, had vendors with kitty products with a % of proceeds going towards the fundraiser, pet adoption information booth, .... All sorts of ways in one place to raise moneies and awareness.

Cecil, you have some cute cat friends! And I can tell Leo the Lion was a very special cat, indeed.

Hooray for a fundraiser for Cats Exclusive. I wish I could think of a good spot to hold it, but I am not too good at those sorts of things.

ps: My Mommie says she loves Gin, too! It's so great that he is becoming much less shy.

The Whiskers and Purrs Gang said...

Dear Cecil,
Yes, you was one real super-duper fierce kitten...and you is real handsome big boy now! We likes your bloggy!

Grandma's kitties are so cute. Reading about Leo made my eyes leaky because I know how your Mommy feels. She is very lucky to have found such a wonderful sweet kitty like you Cecil. Bowling could be fun, but you live in a nice warm climate, so outdoor activities like a walkathon and a picnic would be fun too. Hmm... I'm sure your mom will come up with something cool. :) Have a really wonderful weekend okay?
Lots of Hugs,
Lorianna

You have some great friends! You sure look cute as an itty bitty baby cat!
--JB

Great to see all ur buddies! They all so funtaztic...
Fundraiser? Juzt a thought, how about the community hall, well they do charge you free, right? Outdoor is great too, may add some additional fun activities furr kids or families to attract people to come & participated....

hey, i live in ohio! i'd better get more info on these evil people who are killing cats for cash. what nasty beans!
bowl a thons are fun, or even dance a thons! maybe a hotel or reception hall will let you rent for free.
mommy is going to be helping her shelter's fundraising auction all day. wish us luck we make lotsa money.

hey cuz!was surprised to see "me" when i went to see what you wrote about today. and yes grandma is trying to help me with my diet. both grandma and i were so sad when we saw the pic of Leo, in fact grandma's eyes got leaky too. We sure do miss him but we know he is watching over both you and mommie. grandma wants you to keep us posted on your fundraiser. have a good weekend.
Timby and of course Tigger too! 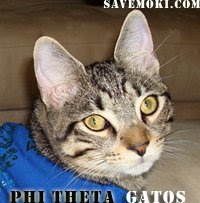 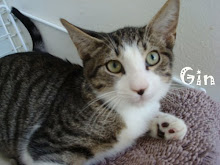 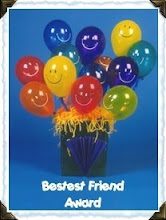 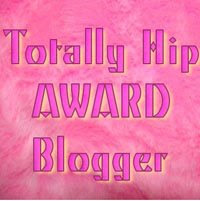 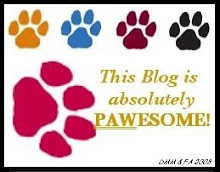